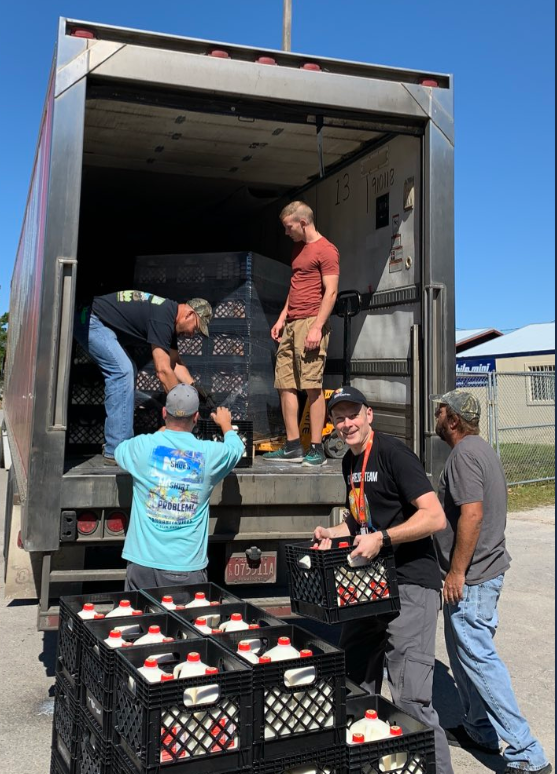 DALLAS – Oct. 18, 2018 – Borden, a heritage American brand and leading U.S. dairy processer and distributor, teamed up with World Central Kitchen to distribute 177,260 individual servings of milk, orange juice, iced tea and bottled water to those affected by Hurricane Michael. The beverages were processed and packaged in Borden’s Dothan, Ala. plant as special orders for hurricane relief. In order to ensure maximum freshness, Borden transported and stored the drinks on three of its state-of-the-art refrigerated trucks.

“Borden moved mountains to make their donation happen immediately in the aftermath,” said World Central Kitchen Head of Strategic Partnerships Erich Broksas. “No surprise, the chocolate milk and sweet tea have been the biggest hits for those who have been affected. Those beverages bring a sense of normalcy and comfort in very difficult times.”

As a result of the hurricane, Borden shifted production and distribution across its network of 13 plant locations to prevent any customer disruptions and to specially produce additional beverages for World Central Kitchen. World Central Kitchen distributed the drinks among evacuee shelters and centers serving the local communities in Bay County, Fla. and surrounding areas.

“World Central Kitchen arrived days ahead of the storm to begin preparing, which enabled Borden to respond immediately with beverage supplies,” said Borden CEO Tony Sarsam. “We are proud to partner with World Central Kitchen as they anticipate serving more than 300,000 meals for those affected by Hurricane Michael.”

To donate to World Central Kitchen, visit worldcentralkitchen.org/donate. Borden is also collecting funds for its employees who have been affected by Hurricane Michael and will match 100 percent of donations made via GoFundMe at gofundme.com/borden-employees-hurricane-fund.