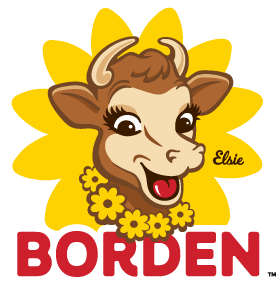 DALLAS – May 8, 2019 – Borden, founded more than a century and a half ago, has reemerged with new leadership, a focus on its people and an optimistic vision to reclaim its position as the undisputed leader in the dairy industry. At the center of this dramatic revival is the beloved Elsie, Borden’s iconic spokescow, who has been given a more modern look.

First introduced by Borden in 1936, Elsie is one of America’s best-known brand mascots and was named one of the top 10 advertising icons of the 20th century by AdAge. Elsie’s new appearance can be seen across the company’s marketing channels and will be on product packaging in dairy aisles throughout the southeastern U.S. this summer.

“Despite not having made marketing investments in recent years, the Borden brand still holds a lot of equity, driven by over 150 years of dairy leadership,” said Borden Chief Marketing Officer Joe DePetrillo. “Elsie remains a beloved and iconic representation of this proud heritage with people of all generations. For these reasons, we wanted our brand refresh to be evolutionary in nature rather than revolutionary. We were mindful to respect the familiarity and trust Elsie has earned, while ensuring that our brand stays relevant to today’s consumer.”

Part of Elsie’s re-introduction involves a new marketing campaign with the tagline “Glass Half-Full Since 1857,” highlighting the “pure joy” and optimism of Borden products.

“Our research showed that Elsie represents pure joy and optimism for American families, which we are harnessing as key drivers in all marketing initiatives in 2019,” said DePetrillo.

Borden partnered with BrandCory on its logo refresh and with Ohio-based Curiosity  for its marketing strategy and plan. Curiosity will support a fully integrated campaign, including creative, consumer strategy and media to announce that Borden is back and better than ever.

Setting the Stage for a Comeback

In its heyday, Borden was the only national dairy company in the U.S. and the world’s largest dairy operator, surpassing $7 billion in annual sales. Besides being known for the country’s best milk, Borden was woven into pop culture, thanks to Elsie. She was considered America’s sweetheart, reaching celebrity status with appearances at the Macy’s Thanksgiving Day Parade, the World’s Fair, major universities and even cameos in Hollywood and on Broadway.

Borden ran into turbulent times after an ownership change in the 1980s. Sales dropped and Elsie’s fame dimmed due to limited exposure and lack of marketing support. But now she’s back, and Borden, a newly independent company, is gaining momentum and industry share, thanks in large part to a strategic and innovative new leader.

Leading Borden’s rejuvenation is Chief Executive Officer Tony Sarsam. Sarsam has more than three decades of experience in the food industry, with companies including PepsiCo and Nestlé. Just prior to Borden, he served as CEO at Ready Pac Foods, guiding the company to an industry leading 60 percent growth over four years.

Since taking the helm at Borden in March 2018, Sarsam has hand-picked a new leadership team, re-established the marketing and sales functions, and added a research and development team to help the company launch innovative new products. He also introduced “The Borden Difference,” the company’s identity and rally cry to be the most service-oriented dairy company that helps customers win. Through his commitment to a “People First” culture, Sarsam is eager to attract and retain the most talented workforce in the dairy industry. And these efforts are paying off – Borden has quickly established itself as the market leader in customer service and is seeing significant sales growth.

“Borden has a rich history spanning many decades and filled with both victories and lessons learned,” Sarsam said. “When it comes to our future, the people of Borden have a ‘glass half-full’ outlook. We are passionate and ready to bring innovation and pure joy to milk lovers everywhere.”